There’s something rather scary about visiting a place that you always dreamed of going to….

What if it’s not quite how you hoped it would be? What if you feel slightly let down? Well I needn’t have worried, South Africa captured my heart in so many ways and I absolutely fell in love with the beautiful country and the city of Cape Town.

How could you not fall in love with this place? 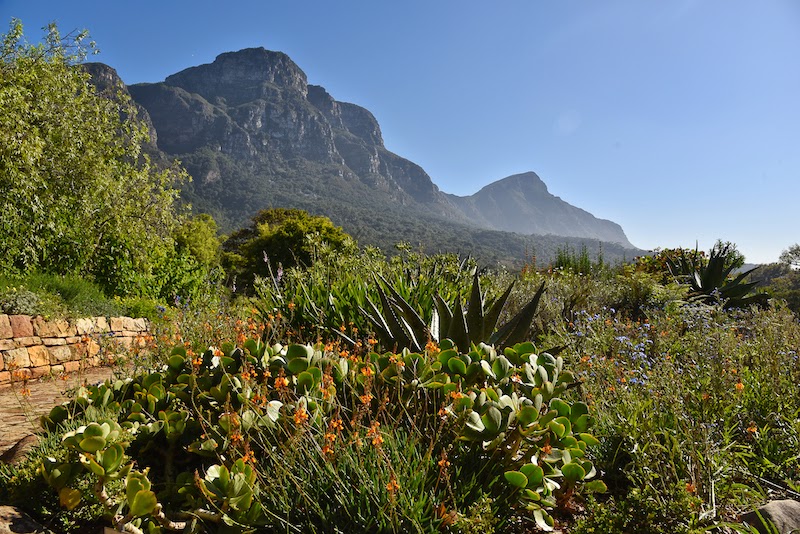 The very lovely people at Jarat Tours had arranged for Mr S and I to go on their Cape Peninsula Tour and experience some of Cape Town’s beautiful beaches, scenery and native wildlife. Our tour guide, Joanne, picked us from our hotel and we were once again quickly seated in a comfortable Mercedes with cold bottles of water, refreshing sprays and mints.

Joanne explained to us that Jarat Tours were very flexible and allowed for a completely bespoke experience, we could basically go where ever we wanted. I was lucky enough to have lots of recommendations from my South African blogging friends and Kasha had suggested I pay the Kirstenbosch Gardens a visit.

The beauty of the place exceeded my expectations, 36 hectares of gorgeous greenery, fringed by the imposing mountains…

…and a huge variety of South Africa’s indigenous flowers…

Clearly blue skies didn’t hurt either, it certainly wasn’t difficult to start falling in love with this place. Established in 1913, Kirstenbosch was the first botanic garden to be devoted to a country’s native flora and fauna and is now a UNESCO World Heritage Site.

Mr S and I strolled through the garden hand in hand, taking a moment to breathe in the sweet air, admire the plant life and smile about how happy we felt here.

We could have wondered around that beautiful garden for hours and stopped for a picnic on the grass but as we had a full day ahead we decided to check out The Centenary Tree Canopy Walkway which is fairly new to Kirstenbosch.

The walkway is a steel bridge, winding along the tops of the trees…

Inspired by a snake skeleton, the walkway has been nicknamed Boomslang meaning tree snake.

Now as we were raised twelve metres above ground and the bridge was swaying a little, I have to admit my fear of heights kicked in and my legs felt a little wobbly!

So we came out of the end and on to a larger area of grass where concerts are held in the summer. Can’t you just imagine a perfect summer night with a picnic, glass of wine and concert in the gorgeous surroundings of these beautiful gardens?

Throughout the gardens are sculptures including this bust of Nelson Mandela beside a pepper bark tree that he planted himself in 1996. The smiling face is intended to capture his generous spirit that was loved by the world.

Back in the car, Joanne took us on a stunning scenic coastal drive along False Bay, the largest bay in South Africa, the bay encompasses several small towns such as Muizenberg, St James, Kalk Bay and Fish Hoek but sadly we didn’t have time to check out the beautiful beaches, colourful huts or renowned seafood restaurants, we had other plans in mind.

All dressed up in their little tuxedos.

Now I don’t want to make the joke related to the chocolate bar but these penguins were seriously cute and I really wanted to pick one up take one home with me.

And when this little guy waddled up right next to me, I wondered if my bag was big enough to slip him in.
Boulder’s Beach is actually home to 2,000 (surely they would miss just one?) African penguins. I was really intrigued as to how the penguins, an animal usually associated with cold climate, came to be there. The colony actually settled there in 1982 from only two breeding pairs and it grew to what it is today. Penguins are one of my favourite animals I love the fact that they’re actually monogamous and can remain partners for many years…what romantic little things!

Next on our agenda Joanne drove us to The Cape Point Nature Reserve in the Table Mountain National Park, the location of the two peaks at the tip of the Peninsula: Cape Point and the Cape of Good Hope.

Joanne dropped us in the car park and Mr S and I jumped into The Flying Dutchman funicular (not nearly so scary as the cable car) to head up the rugged cliffs and to the very top of Cape Point.

Here we had totally fantastic views of the beach and rocky coastline below.

But we weren’t at the top yet…

A staircase took us to the lighthouse, 286 metres above sea level.

How could you not fall in love with sea that blue and beaches so pristine?

We headed back down on the Funicular for lunch at Two Oceans, a lovely little restaurant on the reserve. The name of the restaurant refers to the meeting of the Indian and Atlantic Ocean, which doesn’t actually occur at this point, but at Cape Agulhas, which is the southernmost point in Africa.

We enjoyed sweeping views over False Bay as we sipped on our drinks: sparkling wine for me, and diet coke for Mr S.

We didn’t quite realise how big the portions would be and over-ordered, sharing large plates of tuna salad, sushi, calamari and prawns and beef tataki. Rather fortunately, the deep fryer ran out of oil and so they couldn’t bring the chips we’d ordered!

Next Joanne drove us to the lower peak, The Cape of Good Hope, a beautiful rocky headland that is the most South-Western Point of the African Continent.

Of course, we got our obligatory touristy photo!

The Cape of Good Hope also has huge historical significance as it was discovered to be an ideal trading route for Europe with India and Far East. Originally named the ‘Cape of Storms’ an explorer named John II of Portugal renamed it the Cape of Good Hope because of the spirit of optimism felt by the opening of this route.

The reserve is populated by many species of wildlife including this family of ostriches, hanging out near the Cape of Good Hope.

The final climax to our day was the Chapman’s Peak Drive, a scenic stretch of coastal road linking Hout Bay and Noordhoek.

Admittedly I was a little nervous when I saw the sheer drops from the coastal road but Joanne skilfully navigated the twists and turns of the road. There are apparently 114 curves along the road and it peaks at 593 metres above sea level…definitely a reason to be cautious while driving.

And as we negotiated the road, Joanne pointed out some of the damage done by the recent fire in Cape Town, including the site of Tintswalo Atlantic, a luxury hotel that was engulfed by the flames.

Joanne stopped the car at one of the many viewpoints allowing us to take some photos and admire the gorgeous panoramic view of the Atlantic Ocean.

We drove back to the hotel through the beautiful beach neighbourhoods of Camps Bay and Clifton, choosing which house we’d have if we ever lived here…

Thank you Joanne and Jarat Tours, Mr S and I loved admiring the natural landscape of the Cape Peninsula, in fact it was one of my favourite days and definitely an unmissable experience in Cape Town.

I worked in collaboration with Jarat Tours on this trip

My tour with Jarat was complimentary