On the day that we left Tsala, the weather report promised blue skies and sunshine….

Sod’s law, eh? Anyway I’d been really keen to visit the Tenikwa Wildlife Awareness centre, so the hotel booked us in early before we left. And it was very early…before sunrise!

Just outside Plettenberg Bay, Tenikwa is a sanctuary and rehabilitation centre for wild cats and other injured animals. The centre is funded by the various programs and tours offered to the public that allows them to get close to the indigenous wild cats of South Africa. 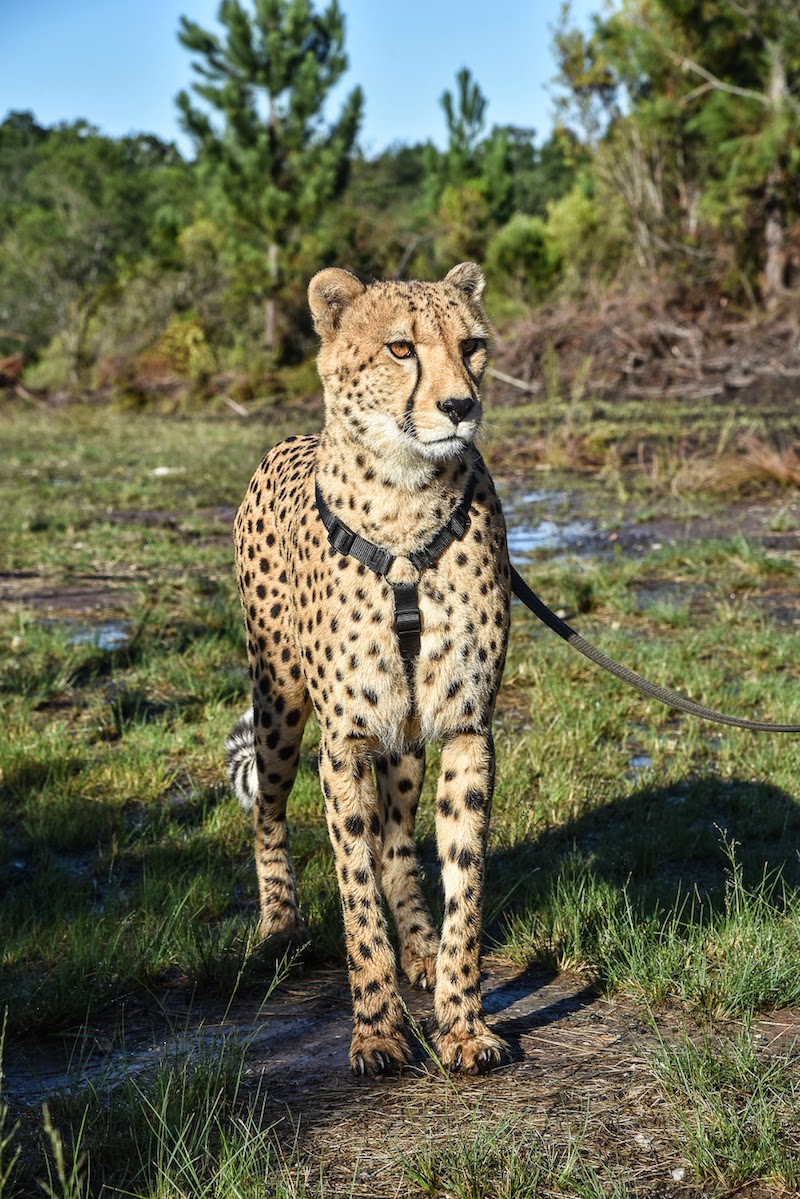 We were limited in time, so Mr S and I had opted to do the Sunrise Cheetah Walk though with more time we could have visited some of the other wild cats housed in the centre. As soon as we arrived we were given a safety briefing and we were instructed to hold the leash loosely as the cheetah could bolt, don’t look him directly in the eyes and walk behind him at all times. Eek!

We stowed our bags and we were lead out to meet the cheetahs who were playing in their large enclosure. The cheetahs were male and female but we were told they were not mates and treated each other more like brother and sister. There wasn’t much in terms of differentiation between the two of them apart from the fact the female was slightly smaller.

Now you’re probably wondering, was I scared? Fear is a funny thing isn’t it? While I was terrified of the spider that I saw in our room and getting into the cable car to the top of Table Mountain, I wasn’t actually scared of this potentially very dangerous animal. These cheetahs are captive-bred and very used to humans, I felt pretty reassured that it would be fine.

Actually, really the cheetah is walking you! Cheetahs are the fastest animals on land so if he decided to run, there was clearly no keeping up with him, even if I was Usain Bolt! Actually, I looked this up Usain Bolt can run at 28 miles per hour whereas the cheetah runs at 70 miles per hour! Though cheetah’s are fast and powerful they are becoming endangered owing to poaching, loss of habitat and the high mortality rate of cheetah cubs. They are currently one of the most vulnerable species in Africa, numbering only around 12,000.

Every now and then he’d stop for a lie down…

We were told that Chester, the male cheetah, is actually type 1 diabetic and is dependant on daily shots of insulin. He is of course, well looked after at Tenikwa, his sugar levels are monitored closely and his fitness and daily walks help improve his health and ability to deal with the diabetes.

The wildlife hospital at Tenikwa admits around 300 animals per year, no animal is ever turned away and every case is overseen by a specialist veterinarian and the caring staff of the centre. Each animal has a rehabilitation plan and release back into the wild is organised with the utmost care. Of course, these sick animals are not exhibited to the public and they are kept in specialised enclosures and treatment rooms.
You may wander whether it’s cruel to keep cheetahs in an enclosure but the animals that we were walking are not releasable into the wild. They were incredibly well-looked after and used for public awareness. The animal is at the forefront and Tenikwa is non-profit organisation that has strong community involvement and educational programs.

It was an incredible experience to be up close to such beautiful animals, and there really is no need to be afraid.

Though we didn’t get to see much of Plettenbrg Bay and the Garden Route, I’m so glad that we got to visit Tenikwa. Walking the cheetah was a truly once-in-lifetime experience.