I’m always thrilled to see my favourite restaurant brands doing well. And what could be better than opening a brand new branch right in the middle of the King’s Road, one of London’s most thriving shopping districts? When Sticks’n’Sushi first opened, the Danish import soon became a firm favourite of mine and when a branch launched in Victoria, Mr S and I were soon regulars. Originally starting 24 years ago by brothers Jens and Kim Rahbek and Thor Andersen, the team took inspiration from their half-Japanese, half-Danish background and created a new cuisine that took the Danish restaurant scene by storm and went on to become one of the most popular restaurant groups in Denmark. Sticks’n’Sushi King’s Road is the 8th UK location, with a ninth set to open in Soho in February.

An invite to see their new branch lured me away from my local with the opportunity to see the brand new venue! The Chelsea version has a spacious two floors (it’s the biggest venue so far) with an open kitchen and counter dining downstairs with cosy booths and a communal table upstairs. Sticks’n’Sushi King’s Road is also doing something a little different with a 24 seat ‘restaurant-within-a-restaurant’ called The Kings Room. The private dining area has its own show kitchen and decor inspired by both the Nordic and Japanese roots of the original restaurant concept. Inside the main restaurant, light floods through huge windows, illuminating the minimalist decor and the people taking a break from shopping along the busy streets to enjoy a delicious lunch. My friend and I have both visited the restaurant’s various locations a few times so we were familiar with the menu that comes in the style of  a photo album. I mean who doesn’t want to see what their food looks like before they order it?

The first dish was one of my friend’s favourites and quite new to me. Hotate Kataifi is composed of crispy scallops with miso aïoli, trout roe and cress and is absolutely delicious. With a hot crunchy outer coating and a big, fat juicy scallop inside, it’s a really tasty bite. It’s worth pairing this dish with a glass of prosecco or one of the cocktails enhanced with Japanese ingredients such as NIPON 75 with shiso infused shochu mixed with organic elderflower, fresh lemon and prosecco.

Sticks’n’Sushi operates under the philosophy of having both angelic and wicked items on the menu. So if you’re going to have something like fried scallops from the menu, you can pair it with lean and carb free sashimi. Or as I think, as little of what you fancy does you good as long as you’re keeping a balance.

We opted for a mixed sashimi selection which includes salmon, yellow fin tuna and yellow tail. As you can imagine, the fish is so fresh and cut perfectly thin.

Next we went for a selection of sushi (a popular dish given the name if the restaurant) called the Nana-ban which included a selection of nigiri with seared scallop, avocado with tofu aïoli, tuna, seared yellow tail, seared salmon, shima suzuki and prawn. One of the great things about Sticks’n’Sushi are the mixed platters, if you don’t know what to order and just want a selection of different things, all your bases are covered from sushi selections to the full works incorporating all different elements of the menu. Lots of these platters are huge and though some of them may look pricey, the portions are so generous. Apart from this sushi selection we stuck with ordering individual items as I think that the platters are better for groups.

Tuna tartare with avocado, sesame, miso, yuzu, ginger and lotus chips is just one thing that I could eat again and again!

And the beef tataki was a little different to versions I’d tried before including smoked cheese, spring onion, tosazu, goma shiro and jerusalem artichoke chips. The smoked cheese was a little unusual but actually worked really well.

Another point on the restaurant’s manifesto is that they serve food that is suitable for everyone even if they don’t like fish. Meaning they cater perfectly for families as well as vegetarians and vegans. There’s actually a ‘Green Kitchen’ and a whole section of the menu devoted to people who are meat-free. The skewers (the eponymous ‘sticks’) have an option to please everyone with the choice of meat, fish or veggie that can be ordered individually by the stick. I ordered my favourite, the melt-in-the-mouth black cod and miso as well as the chicken with chilli dip, teriyaki and spring onion. The latter is a little sauce heavy for me but the chicken is succulent and juicy. 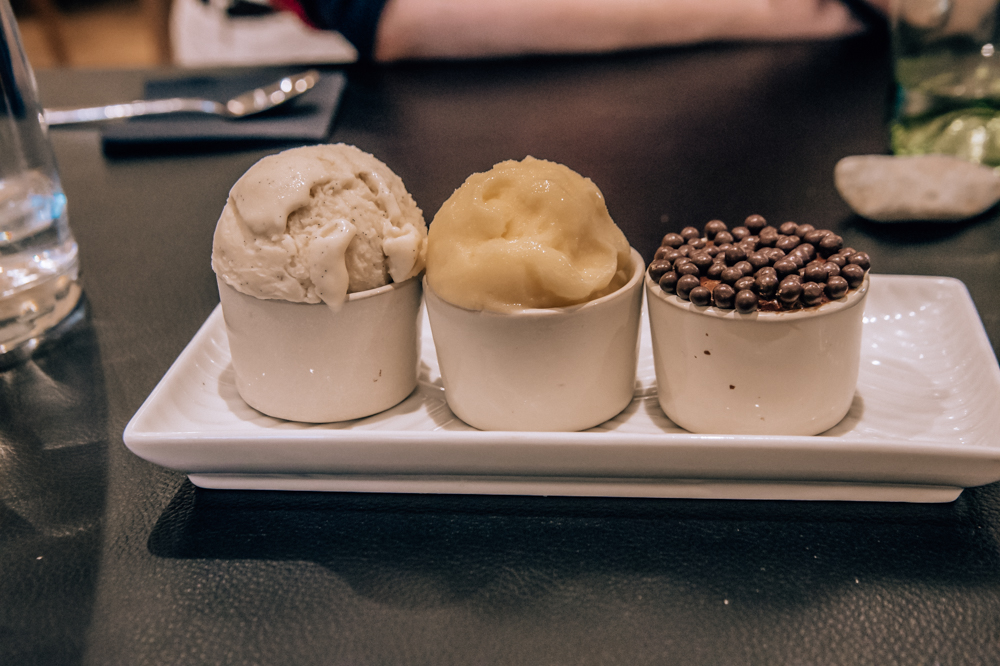 Desserts can be ordered individually but is best to triple-up as it’s three for £10. We struck the perfect balance ordering a very good quality vanilla ice cream with tonga vanilla bean, refreshing yuzu sorbet with Japanese citrus fruit and a decadent Gateau Marcel topped with chocolate pearls.

Of course I was in no doubt that Sticks’n’Sushi would succeed again with their new King’s Road restaurant and I’m looking forward to more to come.

I was invited to review but I have visited this restaurant group many times as a paying customer and am a huge fan.