Ok, so the name intrigued me from the start. Who was this Dickie Fitz whose name was above the door at the restaurant on Newman Street? Fictional character or real person? Well the answer was a bit of both. The owner of the restaurant created the name using his nickname, ‘Dickie’ and ‘Fitz’ coming from the Fitzrovia location. Anyway, it got my attention and intrigued to try the menu of Australian dishes inspired by flavours and ingredients from the Pacific.

As we were at the restaurant for a group press dinner, the plan was to try lots of things on the menu starting with sake pork ribs which were a firm favourite of the night.

Nibbly crudites came on ice with a mashed avocoado.

Mini chicken poppers were like little lollipops but they disappeared so quickly that I didn’t get to try one.

Truffle macancini were a rather clever creation of mac n’ cheese fashioned into an arancini ball. I have to say I found the outside tasted a little burnt but the creamy pasta inside was beautifully flavoured.

Oysters Kilpatrick were a retro classic that I’ve never tried before, a classic English recipe with cooked oysters, cheese, Worcestershire sauce and bacon but still designed to be downed in one. 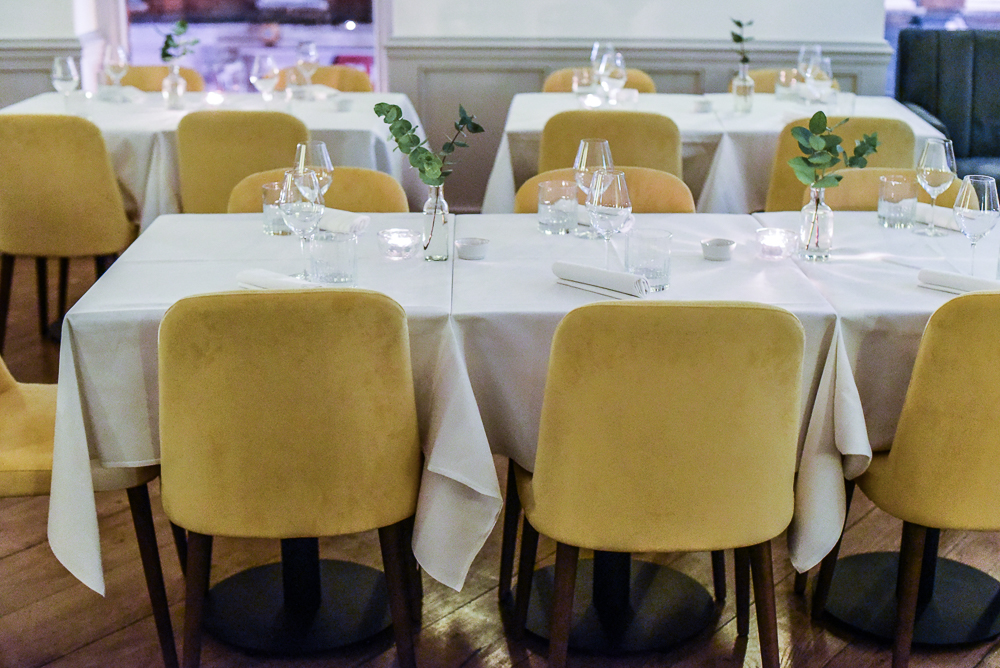 I quickly took the opportunity to take a photo of the restaurant’s interior. There’s something about bright yellow that puts a smile on your face and makes you think of sunshine – very fitting with the hotel’s Australasian theme.

Tuna tataki with avocado and ponzu is always a firm favourite of mine and at Dickie Fitz it was perfectly prepared and delicately flavoured.

A good beef tartare topped with egg yolk and served with sour dough fed my current obsession with this dish.

When we saw Kumura on the menu, a few of us around the table questioned what it was, but fortunately we had an Antipodean at the table and Connie explained that it was sweet potato and here it was served with blue cheese, walnut and miso.

Rib-eye on the bone served with bone marrow and lamb chops with sake and mint were the two meat dishes. I have to say I avoided these as they looked heavy and fatty, which was indeed the general consensus about the beef. Plus the meat was very rare which is fine if you like your steak blue and most people around the table did!

More my cup of tea was the lobster served with wild garlic and chilli. Around the table were various side dishes, my favourite by far being the green beans, served in a delicious spicy sambal. There was also kale with garlic and ginger, mash and a cabbage dish. All of which had a strong taste of garlic – that’s ok I like garlic – but also rather heavy on the salt.

My favourite dish of the evening was a light and healthy steamed barramundi which came with dashi, cabbage and daikon. I loved the Asian flavours of the dish and the flesh of the fish flaked apart beautifully.

Sydney native, Chef Matt Robinson, popped out from the kitchen throughout the night to explain the dishes, their origins and his inspirations which have come from his experiences around the world.

Finally the dessert platter arrived in all it’s glory. Though the kaffir lime panna cotta with eucalyptus and green apple sorbet sounds odd, I actually really enjoyed it as a palate cleanser. However the chocolate fondant with salted peanut and the banana bread sticky toffee pudding had more mainstream appeal.

Finally Matt presented his homemade lamingtons, made in true Aussie fashion, these can come in different variations but Matt’s version were sponge cakes covered in coconut and ginger. Connie was excited to try one of these as they represented to her a taste of home.

I must say that I found the dishes at Dickie Fitz a little hit and miss, though having said that I am still intrigued to return as several of the dishes were not necessarily what I would have ordered myself.

I sampled the food from Dickie Fitz as part of a media dinner.